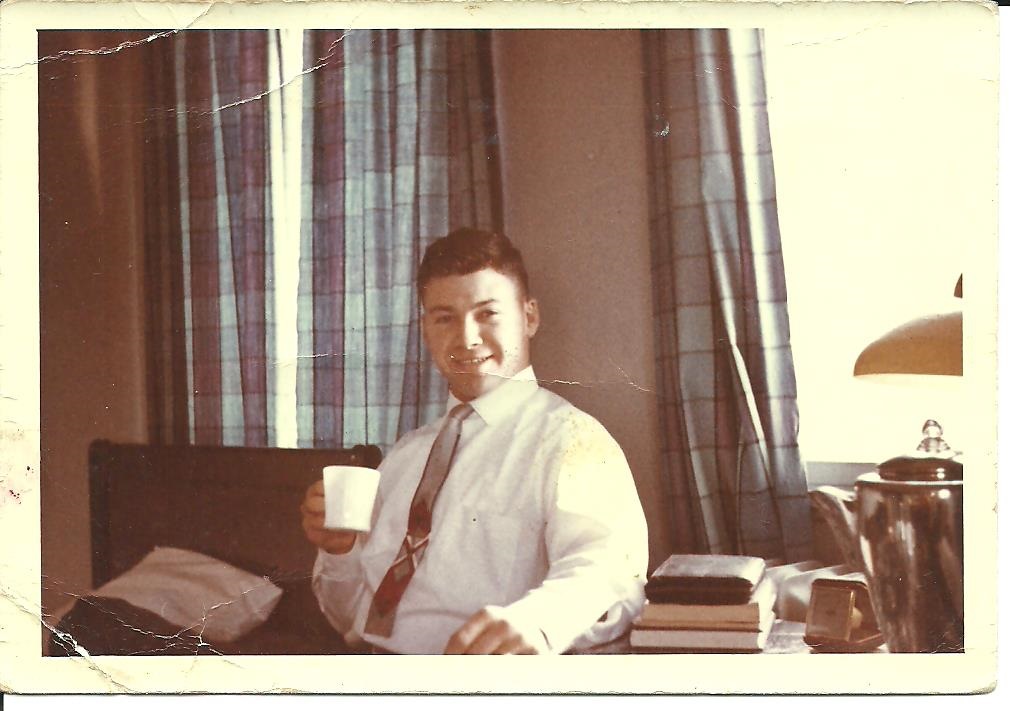 On a cool October night, my Father and I stood outside, staring up at the sky just after sunset. We were looking for NASA’s International Space Station that orbited the globe every hour and a half and would be visible to us for only 6 minutes. It did not surprise me that my Father spotted it first. A small gleam of white canvassed the night sky as we wondered aloud just how fast it was traveling.

My Father has been looking up for decades. Perhaps as a boy working on his father’s

tobacco farm, he stared at the heavens and wondered what life would be like in the sky. As a young man, he had already decided to break tradition and forgo farming as a way of life. He knew firsthand how dependent their family was on the weather to bring in a good crop. They had spent backbreaking days laboring in the fields, only to see their crops wash away from torrential storms. It was my grandfather’s job at the Tennessee Fish and Wild Game Commission that provided steady income for their family of seven.

So when it was time for my Father to make his way in the world, he joined the Air Force in the summer of 1960. It was this choice that enabled him to fly on an airplane for the first time and get his first taste of space. As a proud member of the 604th Communications Squadron at Ramstein AFB Germany, he served on ground communication control which supported American airmen. While he would never fly a plane, he delighted in being part of a communications team that made air travel possible. This prepared my Father for what would become the most exciting part of his career.

Fresh out of the Air Force and still a newlywed, he took a job at the Kennedy Space Center in Cocoa Beach, Florida during America’s Great Space Race. He was assigned to Range Safety and was responsible for checking each astronaut’s vital signs.

He was there on the afternoon of January 27, 1967 when American astronauts Gus Grissom, Edward White and Roger Chaffee entered the command module to rehearse the launch of Apollo One. Preflight testing went on all afternoon and continued into the early evening. My Father had already left work when a fire swept through the command module, tragically killing all three astronauts.

He was there on July 20, 1969 when Neil Armstrong and Buzz Aldrin of Apollo 11 landed their lunar module Eagle on the moon. Having followed the astronauts’ vital signs since their launch on July 16, he was there when Armstrong famously said, “That’s one small step for man, one giant leap for mankind.”

And he was also there on April 11, 1970 when Jim Lovell, Jack Swigert and Fred Haise launched Apollo 13 on their mission for a lunar landing. He was there when one of Apollo 13’s oxygen tanks exploded, leading to a loss in electrical power in the Service Module prompting Astronaut Swigert’s famous words, “Houston, we’ve had a problem.” He was there when President Nixon called for a day of prayer and thousands across the globe prayed for the astronauts’ safe return.

It was an amazing front row seat to America’s Great Space Race.

In 1995, eight years before my Father was diagnosed with Alzheimer’s, Apollo 13 hit the big screen. Watching that movie with him made me feel like I had a front row seat to our nation’s Space Race.

He told me there were so many things that went wrong on that space mission that the movie couldn’t cover them all, which made the astronauts’ survival that much more of a miracle. Then he told me was something I will never forget. We were watching the scene where communication controls had already switched over from Kennedy Space Center in Cocoa Beach to Johnson Space Center in Houston. Everyone in the control room was frantically searching for a way to bring the astronauts home.

Dad pointed to the screen and said, “What they don’t show you is that every man in that control room in Houston was on his knees in prayer.”

I’ve never been more grateful to have watched a movie with someone than I was that day. Twenty years later, we would watch another memorable movie.

My Father was recovering from having heart stents and was required to spend the night in the hospital. Since unfamiliar surroundings can be disastrous for people with Alzheimer’s, I kept him company, sleeping on the couch by his bed. While he ate dinner, I found a movie on TV starring Gregory Peck called ‘Marooned’ about three astronauts whose rocket boosters malfunction while in space. Released less than four months after Neil Armstrong walked on the moon, the film detailed each person’s role in the control room. Dad lit up like a Christmas tree, watching his role from decades ago on screen. It was like a gift from God. Anything could have been on TV that night. But he was reminded of the historic role he played during America’s Great Space Race ~ the job that brought him the most joy.

0 thoughts on “A Lifetime of Looking Up”