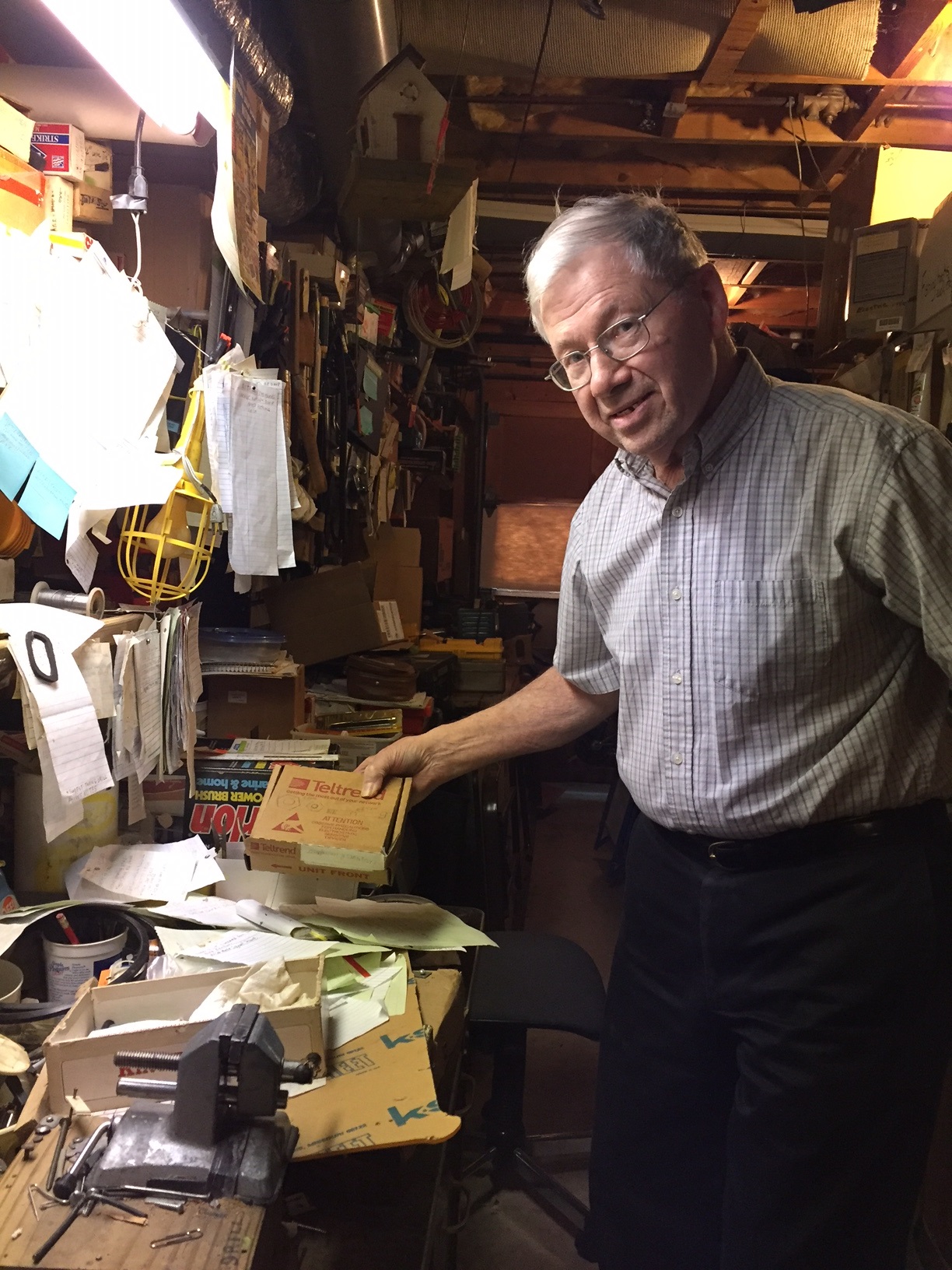 The cellar in my grandparents’ farmhouse was unlike anything I’d ever encountered as a child. It took years before I summoned up the courage to venture down there alone. The cellar door was right beside my grandmother’s table of home baked pies and cakes in their dining room. It looked like every other door in the house, but when you opened it, your eyes adjusted to the dark and you smelled dirt. The entry was about as big as an elevator shaft and the unfinished walls were filled with canned peaches, green beans, okra, peas, tomatoes, and berries. You could always tell what crop came in well that year just by the Mason jars that lined the makeshift shelves. 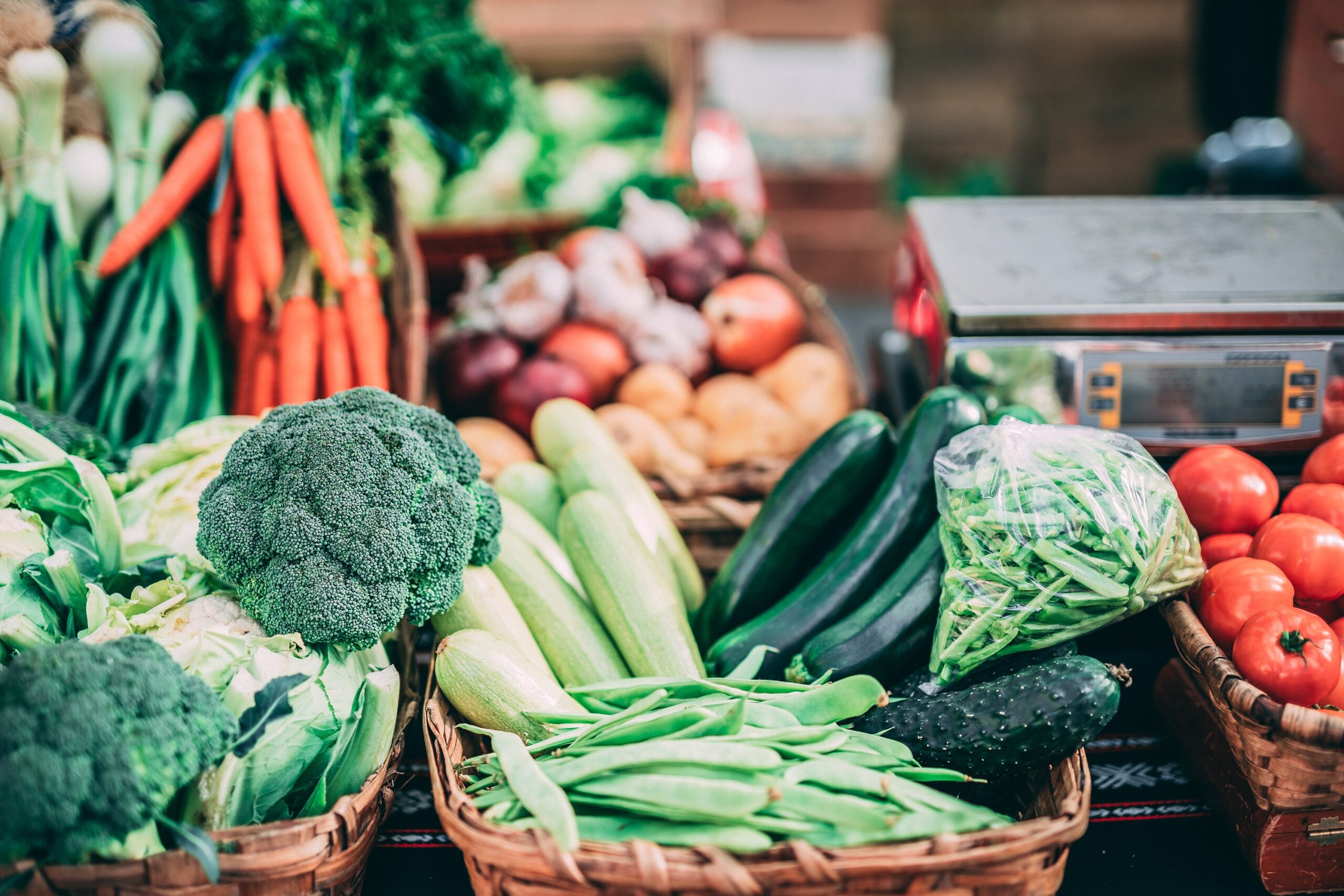 My petite grandmother stood only 4’ 11”, yet she commanded her garden like a seasoned conductor presiding over an orchestra. Once the fruit of the land was ripe for picking, she loaded up every empty bowl in the kitchen. Some of the vegetables she cooked within days; the rest she canned for the long winters. The wooden stairs leading down to the cellar were so narrow that I always made my way down them backwards, feeling as if I were really descending a ladder. A single light bulb hung in the middle of the room and I shuddered to think of it burning out while I was down there alone. The cellar walls framing the house were wooden, but the inner walls were made of dirt. Besides a washer, the cellar held a lot of, well, junk. Even the small spaces between the top of the dirt wall and the wooden floors above were filled with boxes, catalogs, magazines and anything else that cold be wedged in. 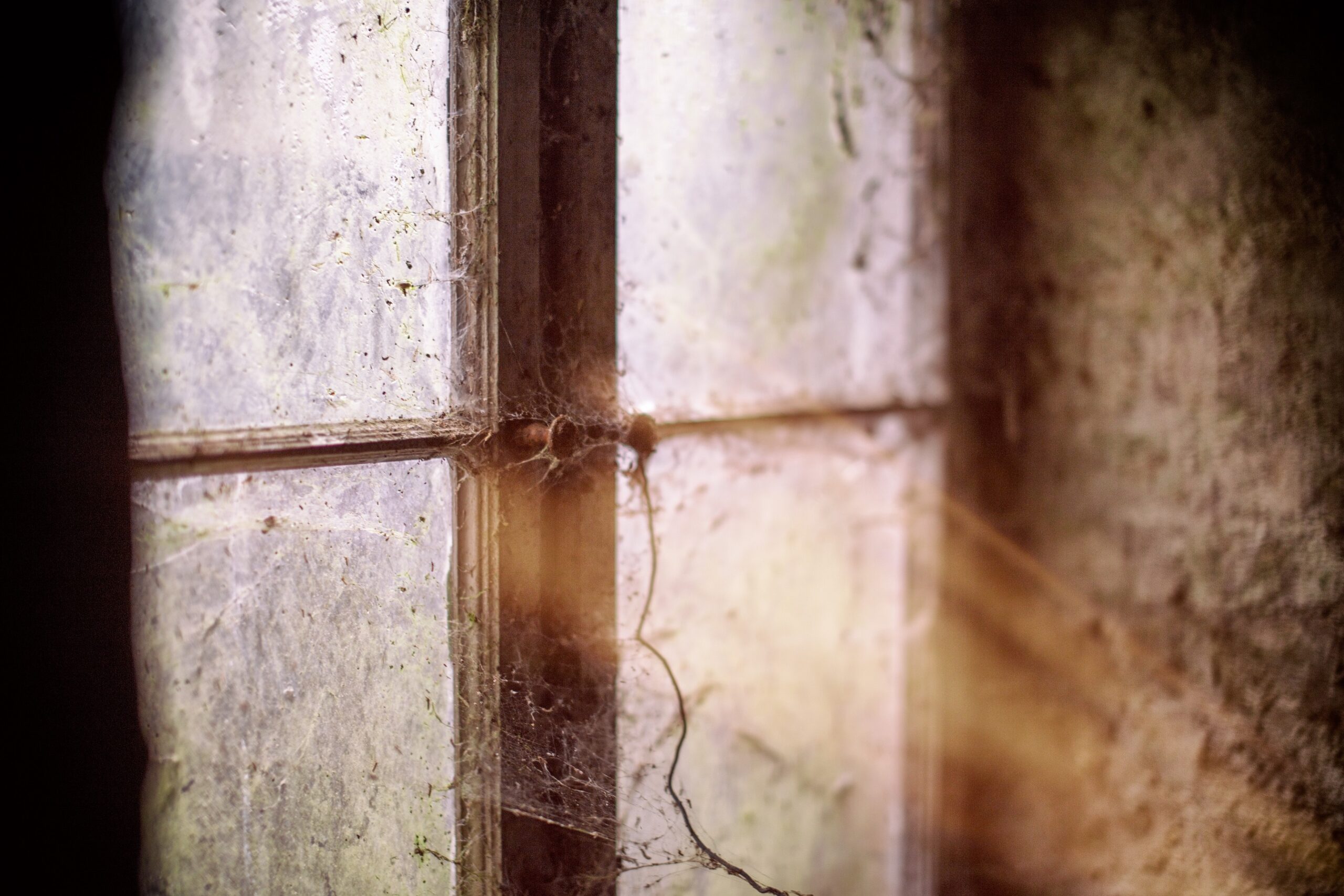 My grandparents worked their 40-acre tobacco farm while raising five children. With many lean years, they had no choice but to be resourceful. However, my grandmother was so skilled in this area, that she took it to a new level. Simply put, she was a packrat. She had plans for many things that she saved, using empty egg cartons for seedlings in the spring and tin coffee cans to hold buttons and other trinkets. But some things she saved “just in case” they could be used in the future. My grandmother saw every nook and cranny in that 1940’s farmhouse as an invitation to store something.

I can’t help but think of that cellar when I look around my parents’ basement today. Since my Father inherited my grandmother’s packrat gene, the basement holds things that predate me. A wheel balance he bought in the 1970’s, my grandfather’s CB radio equipment, car ramps & an oil pan he used to change the oil in our cars, telephones he once installed while running his own business 25 years ago, and enough handwritten notes to rival a Sears catalog. 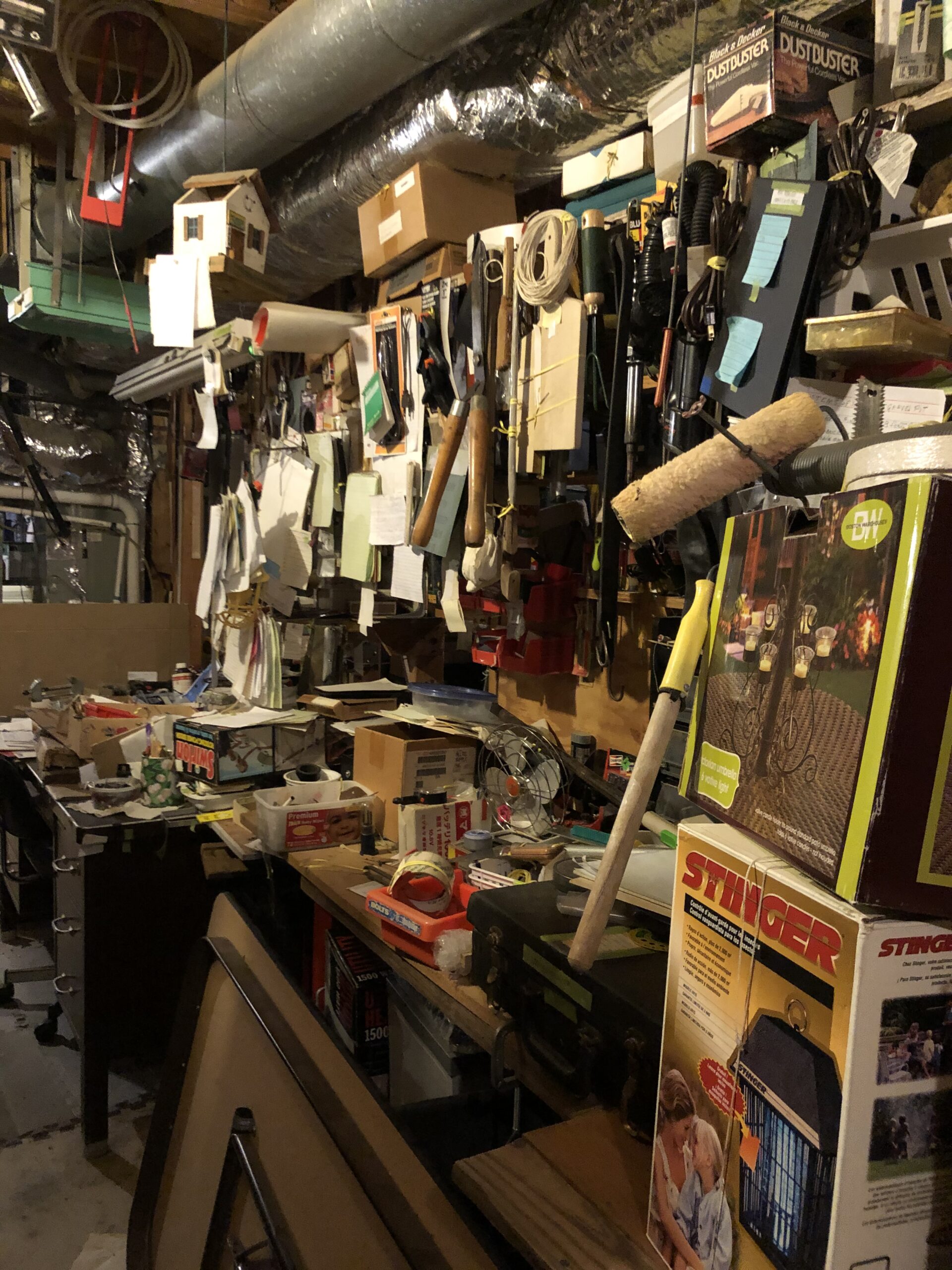 My Father saw a piece of exposed wood as the perfect spot to drive a nail so he could hang a garden tool, a broken birdhouse or an old curling iron due for repair. Dust masks, a fan and yards of coiled rope sit quietly beside power drills, rubber tubing and tin coffee cans of screws. I even found an album of love songs my sister threw away as a teenager.

But for all the flak my Dad got for saving everything, there is one good thing about being a packrat. If you dig a little deeper, you may even find a treasure. I discovered handwritten letters to my Dad from a friend who used to mentor him in Virginia and cards we gave our parents as children. And deep in a box, beside that wheel balance and old papers, I found a gift my Father had given my grandmother in 1960. He had just joined the Air Force to see the world. My grandfather understood his son’s decision perfectly, but my grandmother struggled with it. Her only son left the farm and headed to Lackland Air Force Base in Texas. Before he continued his training in Biloxi, Mississippi, my Father gave her an Air Force flag with a poem printed on it. 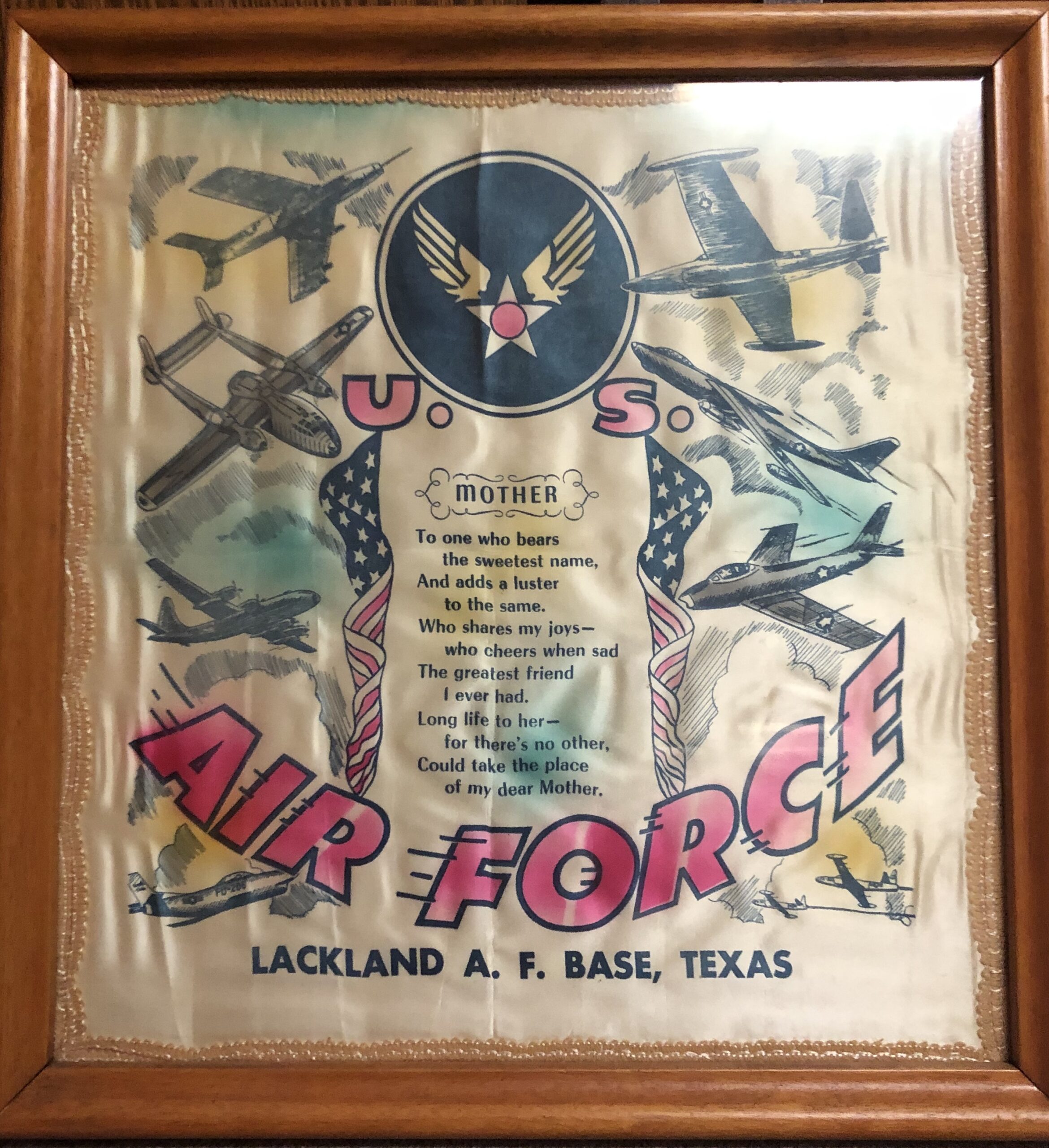 To one who bears the sweetest name,

And adds a luster to the same.

Who shares my joys – who cheers when sad

The greatest friend I ever had.

Long life to her – for there’s no other,

Could take the place of my dear Mother.