It happens around 2 o’clock every afternoon. It’s an itch that needs scratching, sometimes more so than others. 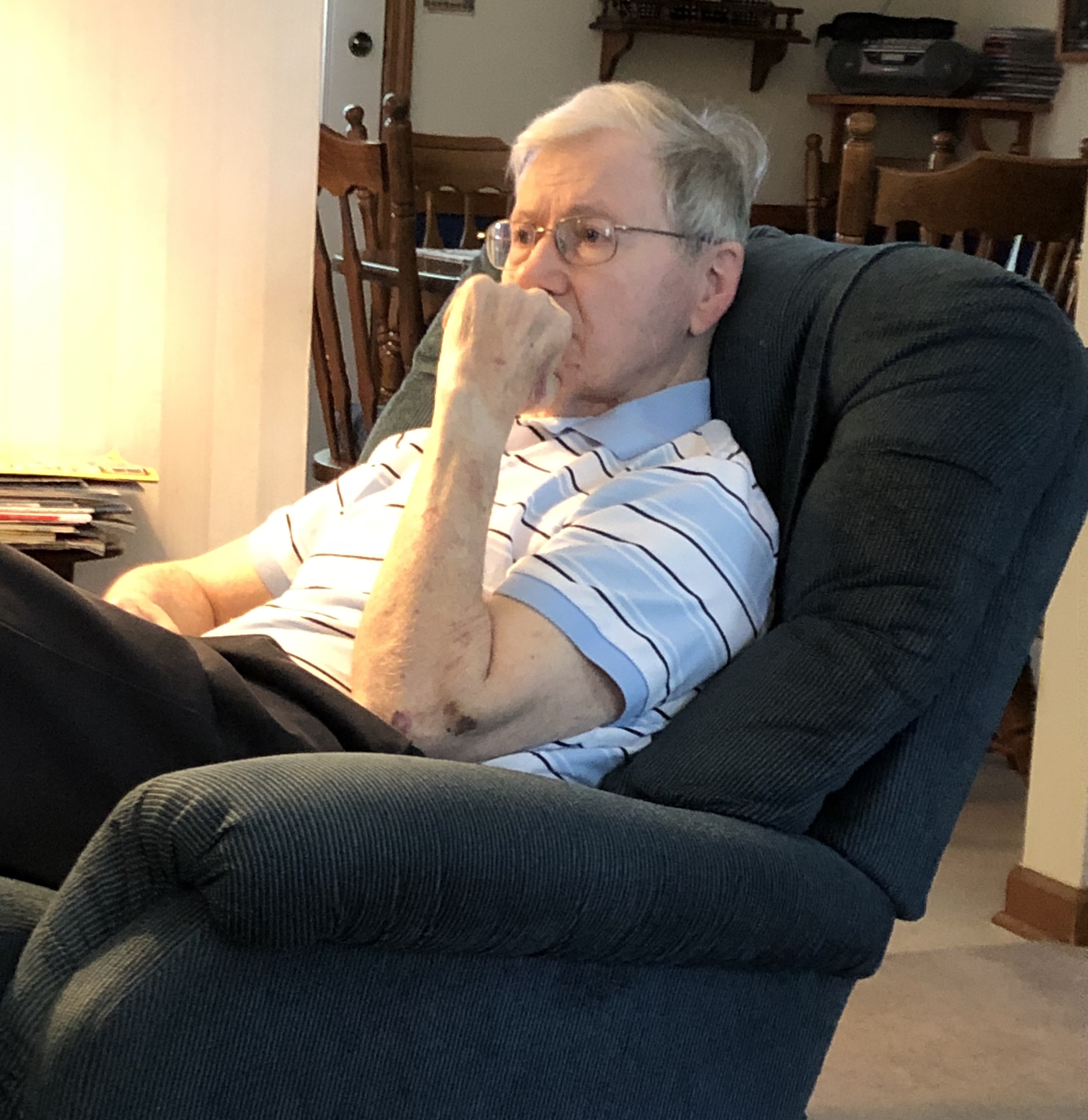 My Father will be sitting in his chair, watching something on television and then he’ll turn to either my Mom or I and simply say, “I’m about ready to go home.”

Some days are worse than others, especially when there’s a full moon. He’s restless, as if the tide going out is pulling him with it and he can’t sit still. He gets up and walks around, touching the curtains, the coffee table, anything he can get his hands on. He’ll sit in his chair and rummage through a stack of magazines or flip the top of a small garbage can that holds used tissues and popcorn kernels.  If he were a child, I would tell him to run around the house a few times or find a neighborhood friend to play with. But he isn’t a child. He’s an 80-year-old man that requires constant supervision.

On the days he goes to Grace Arbor adult day care, he gets plenty of exercise and social interaction. So when he returns home, he’s spent. We might even catch him snoozing in his chair before dinner. But on other days he looks out the window, tracking the weather and planning his trip home. 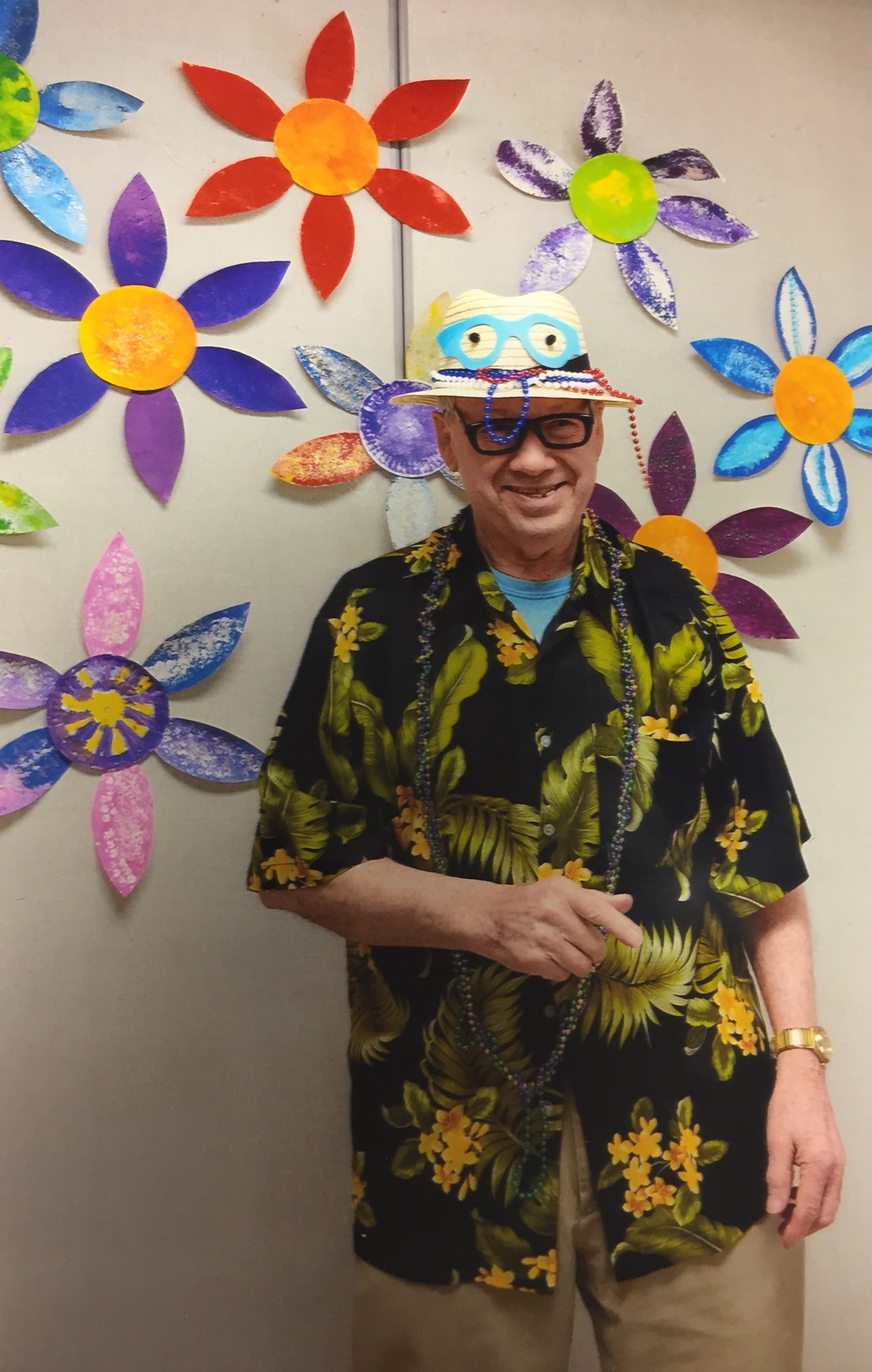 I try to take him out with me to run errands on those days to give him some exercise and erase the boredom that can easily plague those with Alzheimer’s.

Just as a mother of young children plots her outings with the kids in tow, I try to make each trip as uneventful as possible. I add a layer to his long-sleeved shirt to make sure he doesn’t get cold. Although he was hot-natured most of his life, those days are gone. His hands are always cold and each time he wears a jacket, he tugs at the zipper to cocoon himself inside.

After a morning full of steady rain, there’s a break in the clouds so I usher him downstairs after lunch while Mom is trying to rest. He takes each step carefully and I wonder how much longer he’ll be able to handle those. I take him through the garage and watch him pick up those evil sweet gum briar balls off the driveway while I pull the car outside. He doesn’t understand where he’s supposed to sit so I park the car, get out and lead him to the passenger side. I tell him where to sit and he manages quite well. But I see him hesitate at times, like he isn’t sure what I want him to do.

I buckle his seatbelt and we pull out of the neighborhood. He motions to the side of the road and talks about his father arranging something. I can’t understand what he’s saying so I just reply positively, as if I understood perfectly.

Not even a mile down the road, he looks at me with a furrowed brow and I know what that means. He has to use the restroom. Even though I asked him before we left the house and he said no, he has to go now. My mind scrolls through public places I can take him. Ideally, a gender-neutral restroom is the best. But so few places have that. So I just take him into the ladies room with me and apologize to everyone inside and explain that he needs help. There’s a McDonald’s on the right and a Publix on the left. McDonald’s is too crowded so we opt for Publix. By now he has a pained look on his face and I whip the car into the handicapped spot and pull him out so we waste no time.

Mothers of young children have diaper bags with pockets for virtually everything they could possibly need. But nothing like that exists for people with dementia so I wonder whether or not I should grab the extra Depends I have tucked into the glove compartment and stuff it in my purse. Feeling bold or stupid, I leave it in the car and head to the restroom. Of course, there’s someone in the handicapped stall so Dad and I squeeze into a stall meant for one and I get him situated. And for some reason, that sudden urge he had to use the restroom is gone. I explain that where he’s sitting is where he needs to go but he just starts telling me another story about his dad. If I were at home, I would turn on the faucet so he could hear the water running. That works wonders. But I can’t very well leave the stall and expose him to who knows what while I try to coax water out of a motion-sensored faucet. 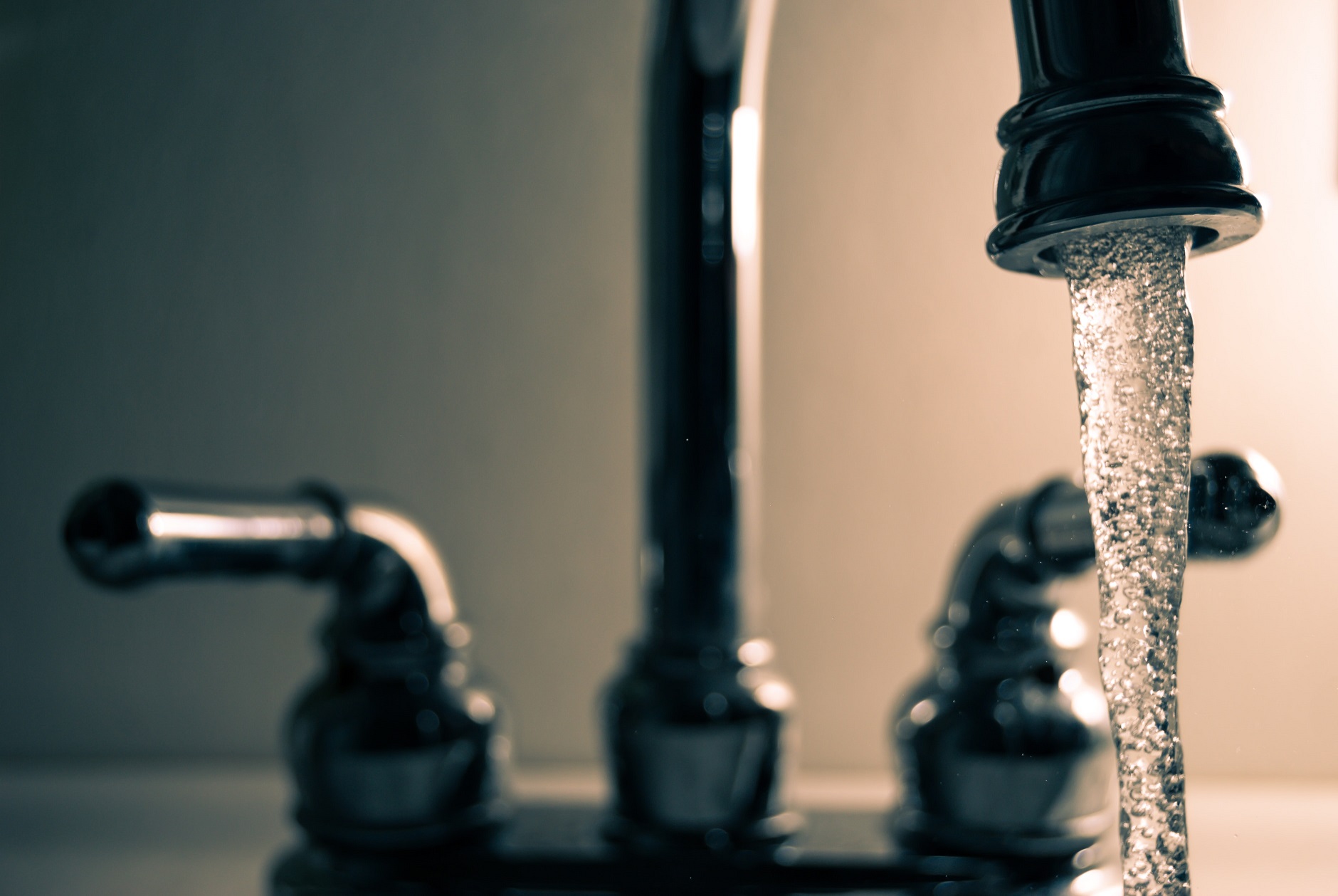 He doesn’t have to go. He’s wearing Depends so even if he did have an accident, he’s prepared. But he doesn’t have to go. I help him up and we leave the store. About 15 minutes later, I’m ordering a frappacino at the Starbuck’s inside our local Kroger and he turns to me with that look again. He’s been pushing a buggy that has my purse, an umbrella, my recyclable shopping bag and now my frappacino in it. So we park the buggy outside the ladies bathroom and thankfully, no one is inside. I pull him into the handicapped stall and get him situated. I take a long sip of my java chip treat and pray that he would use the restroom. After a minute we have success and I never thought I’d celebrate something like this, but I do.

We walk through the store for the next 20 minutes, making sure he gets enough exercise but doesn’t overdo it. We roll up to the cashier and he unknowingly pushes the buggy into me while I empty our cart and then somehow help him keep his hands on the bar of the buggy and move it in front of me while I drink my java chip treat and pay for our groceries. He wheels out to the car and I hold onto him like a child learning how to ride a tricycle. I make sure he doesn’t venture out into oncoming traffic while I unlock the door and open the trunk.

My Father has always loved to help – with everything. Loading groceries, carrying them inside, pumping gas, taking out trash. If it needs doing, he’ll do it. He simply cannot mange on his own, but I’m not dealing with levels of ability. I’m dealing with a human being who needs to feel needed. So I let him put the bags into the car and walk with him to return the buggy before we return home. That whole ordeal took about an hour. It wore him out but he’s a happy worn out soul.

Years ago, I asked Dad how long he wanted to live. At first, he didn’t understand my question. But then he told me that if he ever got to the point where he couldn’t get out and be around other people, he would be ready to leave this earth.

I thought about that while returning home. Afternoons like today may be frustrating or tiresome to me. But to him, they mean the world. So as long as he is able, we’ll keep scratching that 2 o’clock itch the best way we know how. 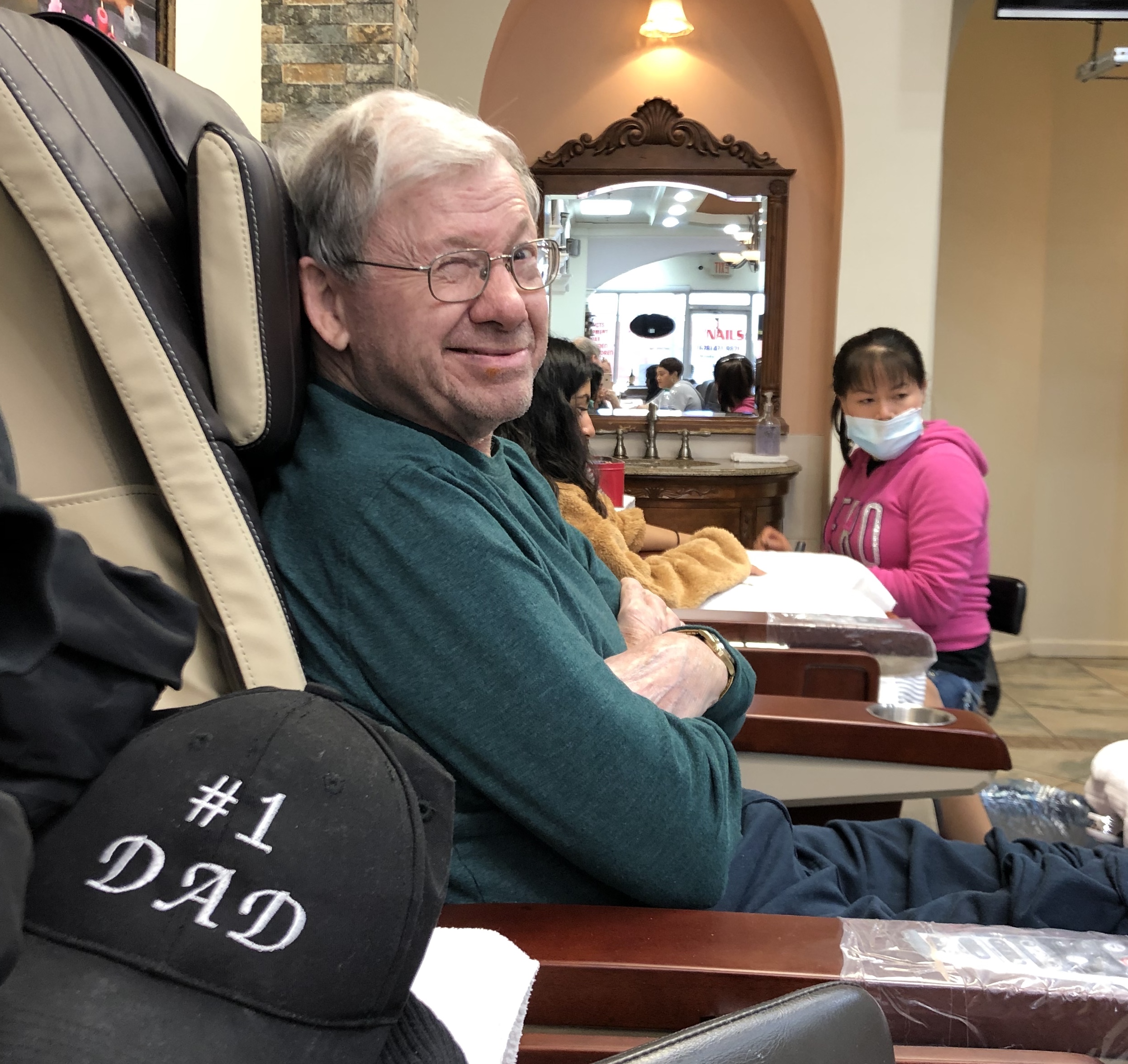