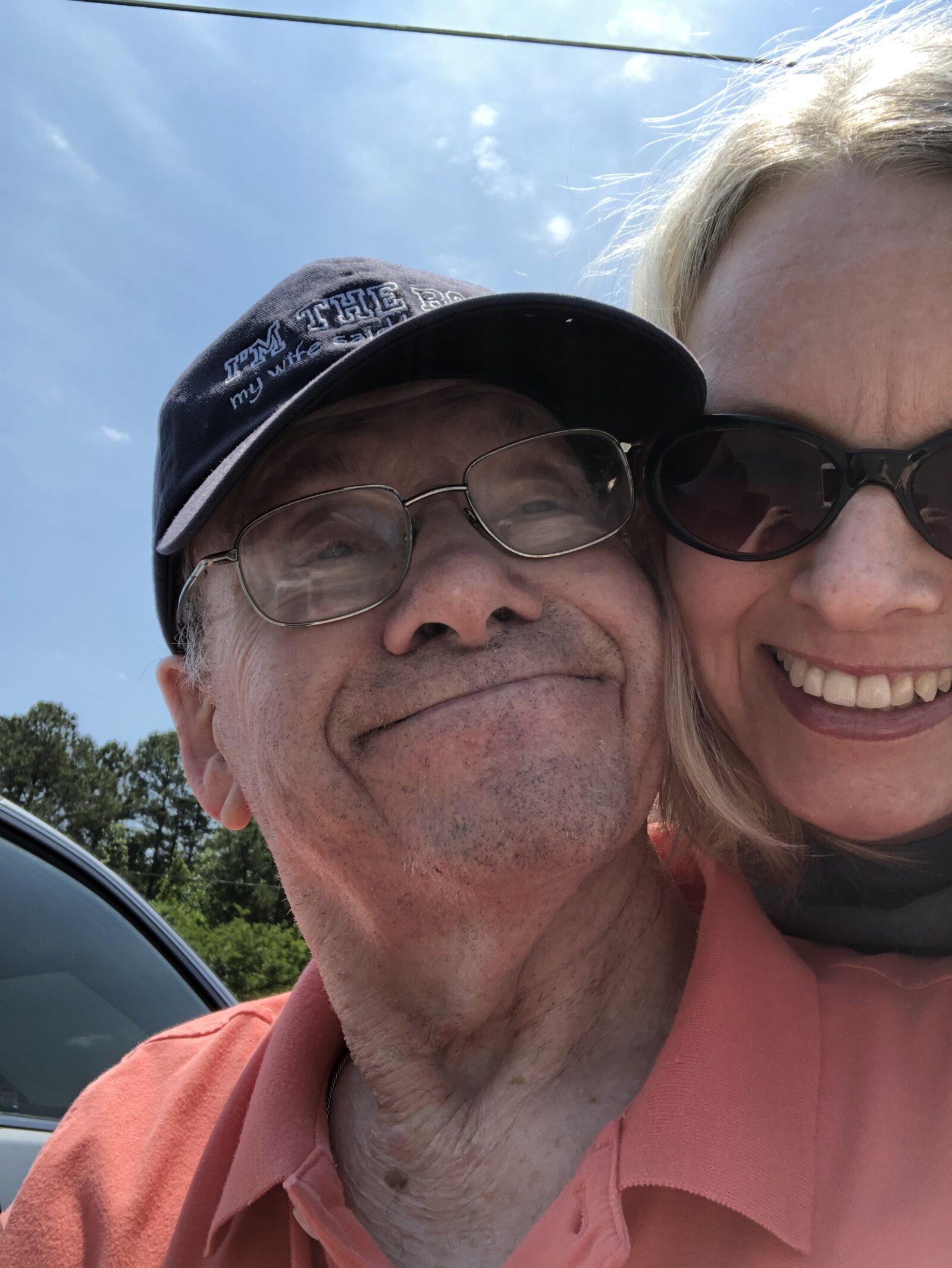 I woke up Monday morning thinking it was going to be a normal day. Only it wasn’t. I had no idea that something was about to happen that would send me reeling and leave me broken. I got Dad out of bed, dressed him, fed him and then put him in his recliner to watch some TV while I got ready. My plan was to drop Dad off at Peachtree Christian Health and then go to a friend’s house to do some work before picking him up at 5.

We all have routines. Things we do without thinking, things we could do in our sleep. But what do you do when your morning routine is jolted to the point that it forever changes the way you see a loved one?

Although my Father was diagnosed with Alzheimer’s more than 15 years ago, he still maintains a degree of independence. He just needs a bit of prodding. After I put on his sneakers, I lead him to the bathroom, hand him a toothbrush and tell him to brush his teeth. And he does. A couple of times he’s gotten a bit confused but never refused. Since the brain of a person with dementia is literally dying, everything is affected, including their sight. I look down and see a white counter with a white sink and a silver faucet. He looks down and sees a blur of white. So I turn on the water and point to where I want him to spit. And he always does. Sometimes he spits on the counter or on the floor, but that’s an easy clean. 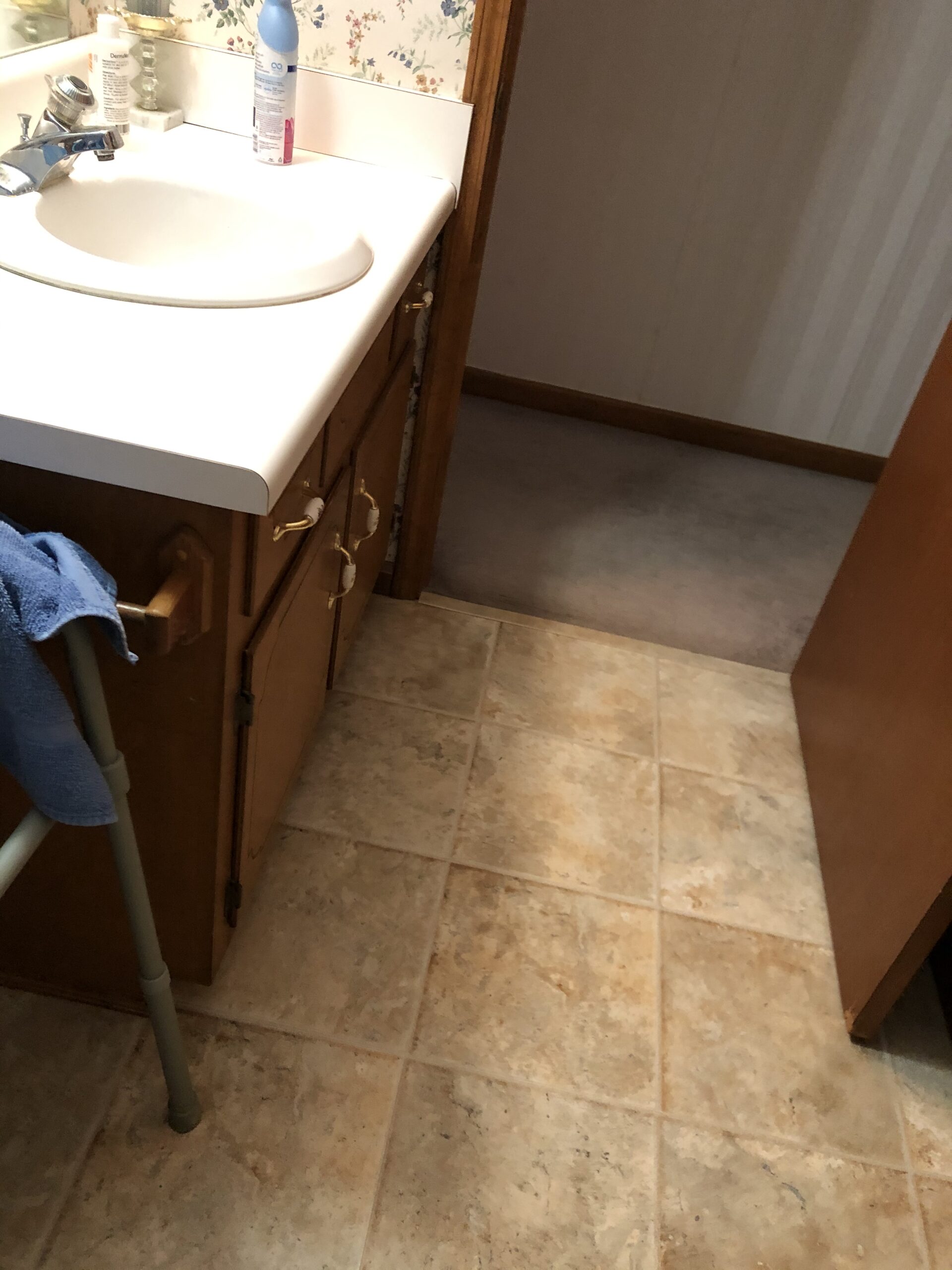 Monday I handed him the toothbrush and at first he resisted.

He did and began brushing his teeth. I turned on the water and told him to spit. And that’s when it happened.

I have no idea what was going on inside his mind at that point. He flatly refused. He tried to speak with toothpaste in his mouth, at which point I tried again to direct him to spit in the sink. Now I wish I’d just let him spit all over me and the floor.

When you speak to someone with Alzheimer’s, sometimes you have to repeat yourself because they don’t understand what you’re trying to get them to do. And that’s what I did. It’s worked a hundred times before. But not that day. 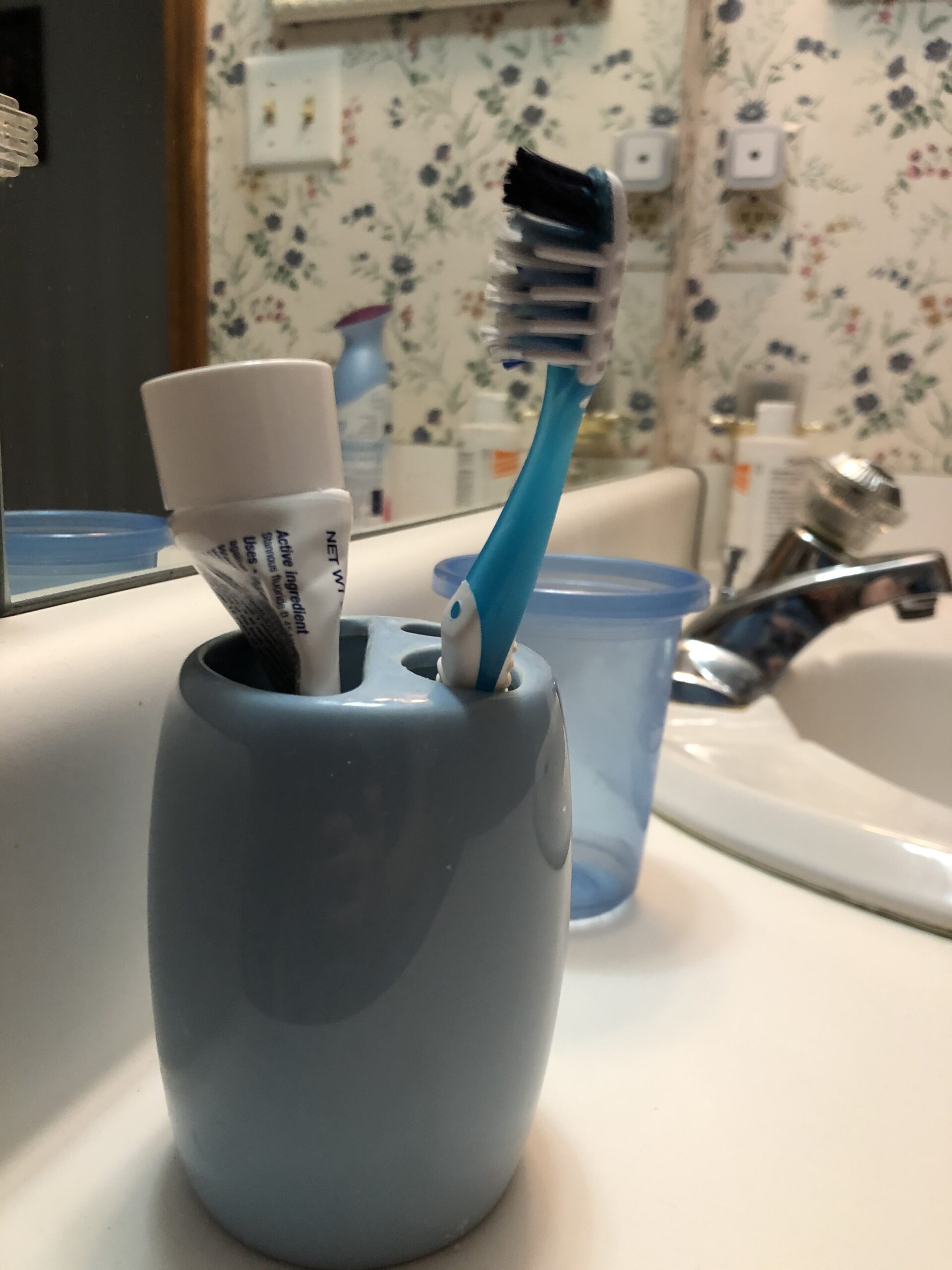 He turned to me, his eyes wide with anger and pushed me back. To say I was shocked is an understatement. My Father had hit my Mother last year, but the doctor increased his meds so that he wouldn’t get agitated or combative. And it had worked. I suppose in my mind I had checked off that box. Problem addressed; move on.

But that morning, when I looked in his eyes, I was no longer looking at my Father. I was staring at Alzheimer’s and it was staring back at me…as the enemy.

I raised my voice, trying to get him to stop. He stepped toward me, grabbed my forearm and began twisting it. I was stunned. And scared. So I raised my voice and yelled at him to stop. Mom appeared at the doorway to see what was going on. I shoved a cup over his mouth so he could spit in that, which thankfully, he did. And then I lost it.

The dam burst inside me and the tears wouldn’t stop. I know this sounds ridiculous, but I never thought he would do that. I’ve always been able to direct him, talk him down from the ledge. But at that moment, I was standing on the ledge and he was trying to push me off. 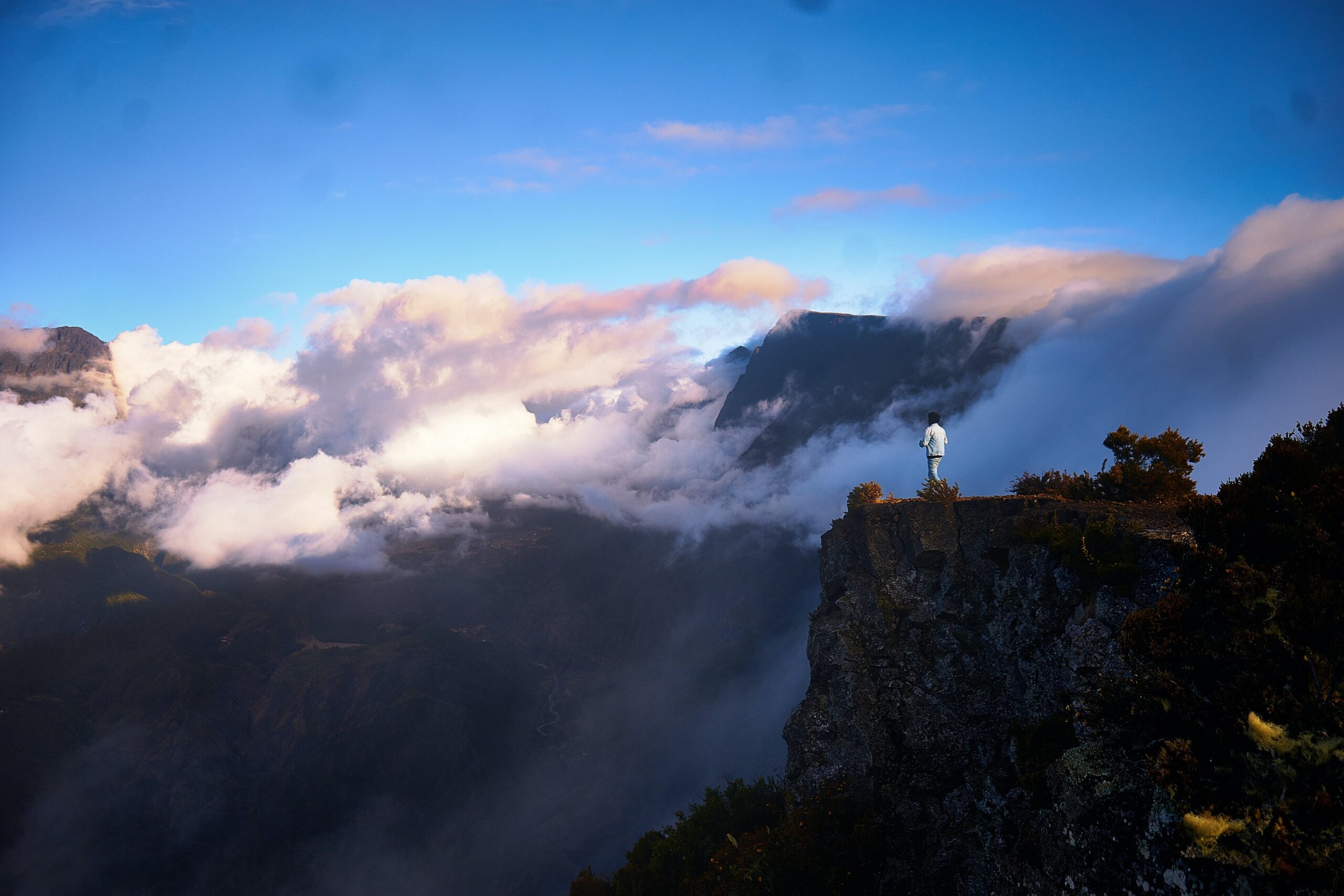 I am a lover of peace, so if there’s conflict between myself and another person, I will try to resolve the issue, even if we agree to disagree. But how do you resolve conflict with a person with dementia? You can’t.

From the moment he got combative with me, I felt a wall go up between us. I no longer trusted him. I didn’t feel safe. I wasn’t walking with my Father. I was walking beside a man who might turn on me and try to hurt me again. I took his hand and led him down the stairs to the basement to put him in the car but the whole time, I wondered if I needed my other hand to defend myself. How do I do this?

My Father is one of the most tender-hearted people I know. Even in this season of Alzheimer’s, he’s maintained that disposition, smiling, thanking people for anything and everything. I know that Alzheimer’s can make a person extremely agitated, even violent. I just never thought my Father would lash out on me.

I told him that I loved him as I pulled out of our driveway. He just sat there stoically in silence. I turned on the radio and the first thing I heard was someone talking about a chemical imbalance in the brain. It was like God’s way of reminding me what was going on inside my Dad’s head. Yes, I knew that in my head. But what do I do with this gaping wound in my heart?

Ask God to heal you from the trauma.

When something horrible happens, whether it’s a car accident, a death, a surgery or a crippling illness, there is trauma. We can see a broken bone on an Xray, a bruise or an incision point on our bodies. But we often overlook the trauma. We need physical healing. But we also need healing from trauma. 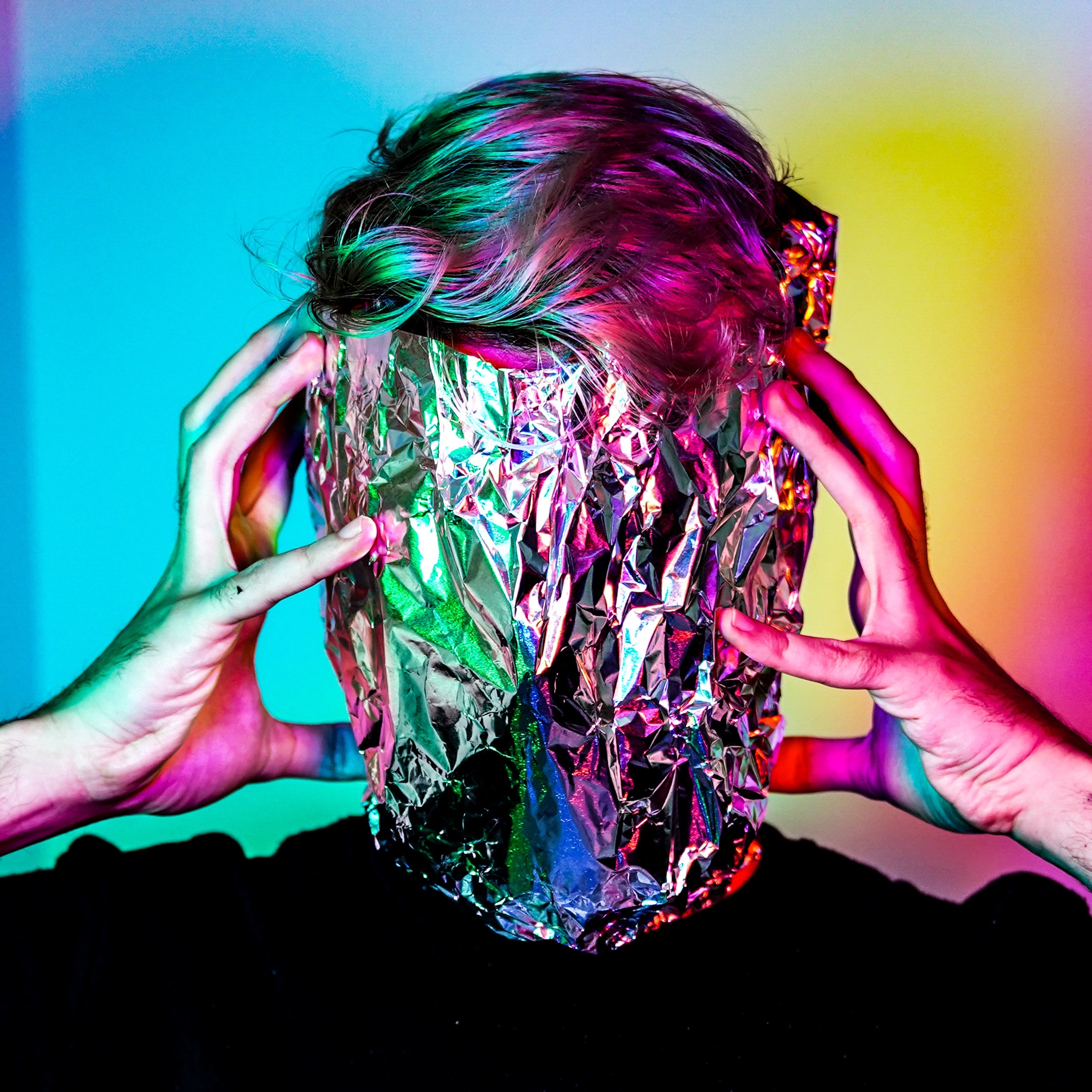 “God, please take away the trauma and any effects it’s had on me,” I prayed aloud.

And the most amazing thing happened. The tears stopped and I no longer felt the urge to cry. I still had to process what happened with my Father that morning, talk about it with a friend and work through it. But I knew in that moment that God had healed me of the trauma.

If you’ve lived long enough, then you’ve suffered through trauma. Maybe you lost your job because of COVID. Maybe your marriage is on life support. Maybe someone has drawn a target on your back and is trying to make your life miserable. Maybe you’ve moved to a different state and everyone in your family has to start over. Whatever it is, there may very well be some trauma under the surface that needs to be addressed. Please don’t ignore it. It won’t go away on it’s own. Just ask God to heal you from it, even if you don’t consider yourself a follower of Christ. He loves you more than you can imagine. And trust me, trauma is never His plan for you. Just believe in Him and ask Him to heal you. He did it for me. He’ll do it for you.

(We’re in touch with Dad’s doctor to see if we need to increase the dosage of his meds. Thanks for praying.)

10 thoughts on “The Morning I Never Saw Coming”